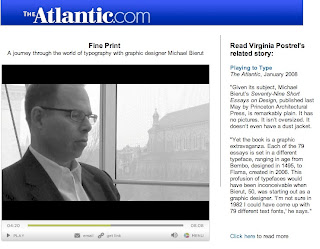 There is a great video and two articles in The Atlantic, January 2008 issue on fonts and typography. The first article, Playing to Type by Virginia Postrel, discusses the use of fonts today and type design. It offers a great background on typography in the digital age.

The second article, What’s in a Font? is an interview with Gary Hustwit, the director of Helvetica, about his making of the documentary on the font. The interview gives some background into how and why this film was produced.

The video, Fine Print presents comments on typography by Michael Bierut of Pentagram. The video is well produced, talks about the use of fonts and gives insights into the choice of fonts for Michael’s recent book, Seventy-Nine Short Essays.
Posted by Daniel Gross at 1/23/2008