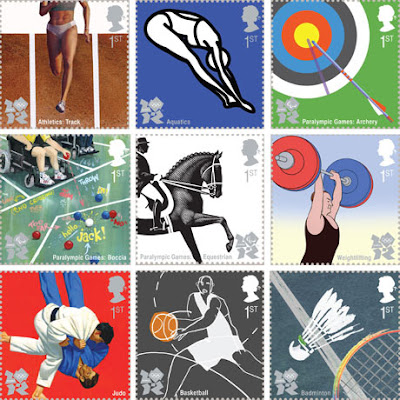 Chicago did not get the Olympic games but London did in 2012. The Royal Mail is releasing this first set of stamps to commemorate the event. Additional sets are due out in the two years to come.
The first set of stamps include an illustration of canoe slalom by John Royle and Paralympic archery illustrated by George Hardie. There is a track athletics collage by Nathalie Guinamard and a diver by Julian Opie. Boccia is illustrated by David Doyle while the judo image was drawn by Paul Slater and the Paralympic dressage by Andrew Davidson. A shuttlecock by David Holmes was used as the image for badminton, while weightlifting was designed by Guy Billout and basketball by Huntley Muir.
To view more of the 2012 Olympics go to these sites set by the 2012 Olympics and the Guardian News in England.
The logo for the 2012 Olympics still has not grown on me though.
Posted by Daniel Gross at 10/06/2009

This is an amazing collection! I particularly like David Holmes' shuttlecock illustration. . It looks like a vintage stamp to me. Thanks for sharing this!

Thank you for your comment. They are a great set of stamps and I am looking forward to seeing the next in the series.

love the stamps (unlike the logo). appreciate the throw back, nostalgia quality of them.