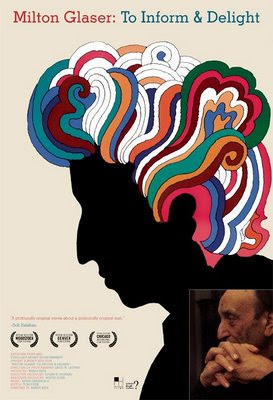 MILTON GLASER: TO INFORM AND DELIGHT: Movie Trailer - Click here for the funniest movie of the week
The movie Milton Glaser: To Inform and Delight will be released on DVD on April 27, 2010. The film is directed by Wendy Keys and gives us an intimate look at the work and life of Milton Glaser. The film covers this great designer, educator and humanitarian through personnel interviews of Milton and those that have been touched in working with him. The film will leave you with the knowledge and understanding of how Milton's work and life have influence generations of designers. A true New Yorker, the city has influenced and given Milton an identity that few designers have had in our profession. The works of Milton inspire us all to be better designers and better humans and is reflexed in the relationships and humor that he has built over a career. Milton is one of the most genuine people I have come into the company of and this film is a wonderful reflection of a great man.
The synopsis from the Arthouse Films website includes:

For many, Milton Glaser is the personification of American graphic design. Best known for co-founding New York Magazine and the enduring I ♥ NY campaign, the full breadth of Glaser's remarkable artistic output is revealed in this documentary portrait, MILTON GLASER: TO INFORM AND DELIGHT. From newspapers and magazine designs, to interior spaces, logos, and brand identities, to his celebrated prints, drawings, posters and paintings, the documentary offers audiences a much richer appreciation for one of the great modern renaissance men.

Artfully directed by first time filmmaker Wendy Keys, the film glances into everyday moments of Glaser's personal life and capture his immense warmth, humanity and the boundless depth of his intelligence and creativity.

Milton Glaser: To Inform and Delight is available to order through Amazon and will make an excellent and must have addition to your design library.
Look for my next post about To Inform and Delight which will include how you can win a copy of the DVD or an autographed poster of the film by Milton.
Posted by Daniel Gross at 4/14/2010