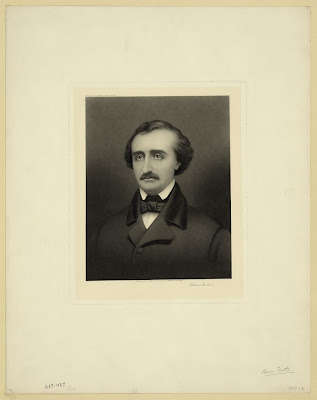 Yesterday marked the 200th Anniversary of the birth of Edgar Allan Poe (January 19, 1809 – October 7, 1849). Having grown up in Baltimore, where Poe spend a portion of his 40 year life, I heard details of his life and works. Poe is known for his poetry such as "The Raven" (the name sake for Baltimore's NFL team) and his short stories, "The Tell-Tale Heart," "The Fall of the House of Usher" and "The Pit and the Pendulum" that tell tales of horror. Poe is also created with writing the first detective novel, "The Murders in the Rue Morgue." On each anniversary of his birth for the last 60 years of so, three red roses and a bottle of brandy have been left at his grave site in Baltimore. This year it stopped. Another mystery has started as to why and another mystery has not been solved as to who has done this over the years. Read more about this story and view images at this link.
Posted by Daniel Gross at 1/20/2010