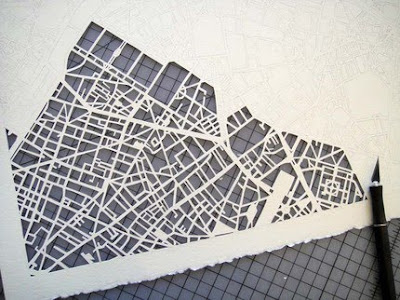 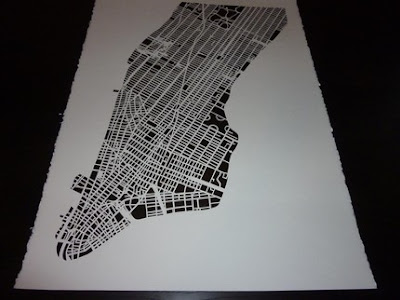 I was recently contacted by Charlotte, NC artist Karen O'Leary who has created a new way for us to view the beauty of the city. Karen's work consist of reworking maps into works of art. You may have seen the cut out maps that she created for New York City and many others which are amazing.

I am an architectural designer with an interest in all aspects of design. The New York City Map Cuts was my first large art piece. It was created to simplify the daily image of the Manhattan map that every New Yorker sees repetitively throughout any day. By simplifying the map into just an image it revealed much more information than a map crowded with words and symbols and color ever could. The information of city planning, the nature of the city block, and the importance of open space is greatly emphasized in my map cuts, especially the images in white. I love the idea of making a familiar object/image even more beautiful by simply taking away the unnecessary.
In my newer pieces, I have deconstructed the elements of a city. By working directly with a given map, new information is found in a similar and different way than with the New York City piece. The folded map is given new character and made into a piece of artwork simply by eliminated the blocks, parks, and usually a body of water. This sharp contrast between the void and solid creates a beautiful image. To me, the main paths, boulevards and nodes of a city are revealed with a stronger sense of identity in these maps. I also especially enjoy the strength that such a delicate piece of paper can hold, it reminds me of myself. 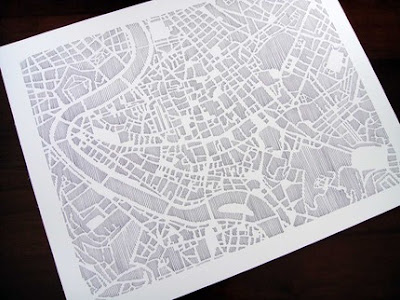 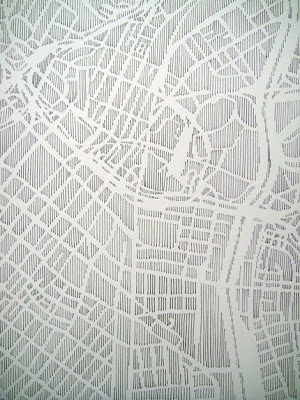 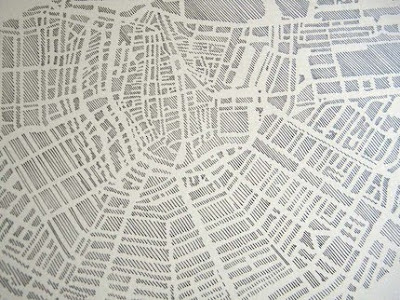 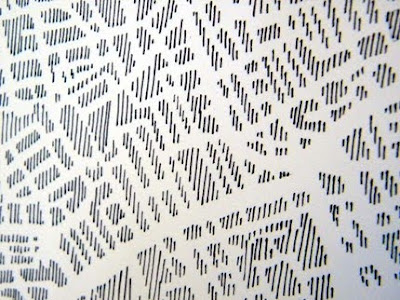 My second series of work is the pen and paper series, which I just adore. I just love the graphic image that the city of Paris lends, so I've taken this image that is so uniquely Paris and I've created it simply with a set of thin vertical lines. It's amazing what a 0.25 mm of a line can create. In the Manhattan, in pen and paper piece, I've extended this concept to further show the "lines" that define a neighborhood. How the city planning and natural boundaries of a city can turn slight differences into a defined or undefined neighborhood.

Karen O'Leary has a shop studiokmo at Etsy where you can view more of her amazing maps and purchase one.
Posted by Daniel Gross at 2/19/2010