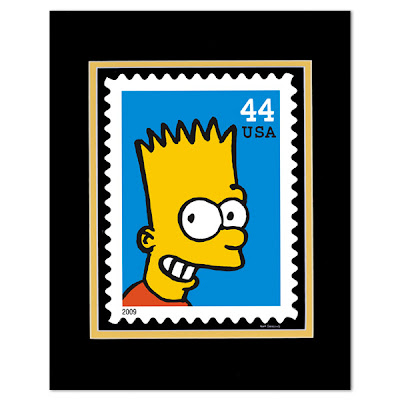 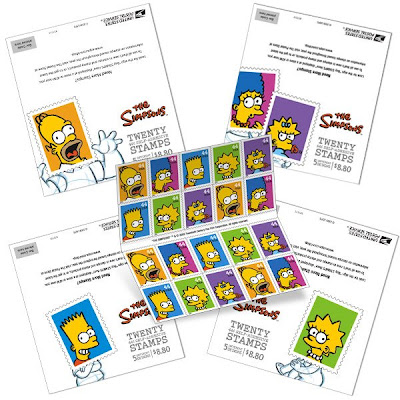 The Simpsons are going "postal" and getting official USPS stamps. The Simpsons show is now the longest running comedy on US television in it's 20th year. To honor this event, the USPS has decided to release a group of stamps showing Homer, Bart and the rest of Simpson family. The stamps will be good for 1st class postage and available nationwide on May 7th.

From the official USPS press release comes these comments:
“We are excited to celebrate The Simpsons on postage stamps,” said U.S. Postal Service Executive Director of Stamp Services David Failor. “Eyebrow-raising to say the least, this witty, well-written pop icon continues to irreverently satire its parody of a middle-class family as it lampoons American culture. The Simpsons stamps, which includes known philatelists Bart Simpson, will serve as a great opportunity to interest youngsters into stamp collecting.”

“This is the biggest and most adhesive honor The Simpsons has ever received,” said Matt Groening, creator and executive producer of The Simpsons.

“We are emotionally moved by the Postal Service selecting us rather than making the lazy choice of someone who has benefited society,” said James L. Brooks, executive producer of The Simpsons.

To see more and to order your Simpson stamps visit this link to the USPS.
Posted by Daniel Gross at 4/11/2009