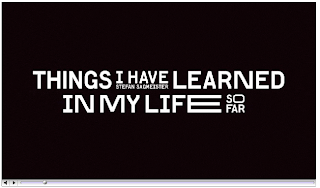 The film crew at Hillman Curtis have released a video about Stefan's gallery show last month in SOHO based on "Things I Have Learned In My Life So Far." You can see several of the works that are included in his book. The video also included brief words by other great designer that where at the opening for the show including Milton Glaser, Debbie Millman, and Massimo Vignelli. The video is well produced as has been done in the past by Hillman Curtis. (be sure to check out their other short videos too) Watch and enjoy the video by clicking this link.
Posted by Daniel Gross at 4/02/2008