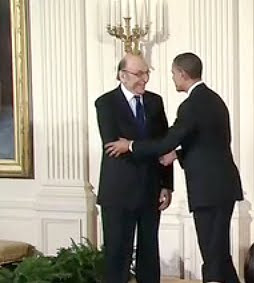 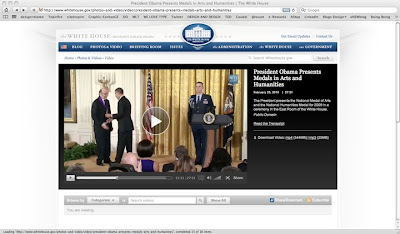 Last week, Milton Glaser received the 2009 National Medal of Arts from President Obama. The National Medal of Arts is given to those who "...are deserving of special recognition by reason of their outstanding contributions to the excellence, growth, support and availability of the arts in the United States." During the past 25 years, more than 250 extraordinary patrons and artists in the fields of visual, performing, and literary arts have been honored. With this medal, the President recognizes the wealth and depth of creative expression of America's artists. Hundreds of nominations are submitted by citizens across the country for consideration by the National Council on the Arts every year.
Milton Glaser received the honor of his award as the first graphic designer to achieve this recognition. President Obama and the First Lady presented the awards at a ceremony in the White House on February 25, 2009.
Milton was in good company with the other winners, Bob Dylan, Clint Eastwood, Maya Lin, Jessye Norman, The Oberlin Conservatory of Music, Joseph P. Riley, Jr., The School of American Ballet, Frank Stella, Michael Tilson Thomas, John Williams, Rita Moreno, Robert A. Caro, Annette Gordon-Reed, David Levering Lewis, William H. McNeill, Philippe de Montebello, Albert H. Small, Theodore C. Sorensen, Elie Wiese.
To view the complete ceremony with remarks by President Obama, go to this link at the White House.
I am so happy that Milton has received this honor. He is a wonderful designer, a compassionate individual, a great educator and the nicest gentleman you will every meet. I send all my best to Milton on receiving this highest and so well deserved honor.
Posted by Daniel Gross at 3/03/2010